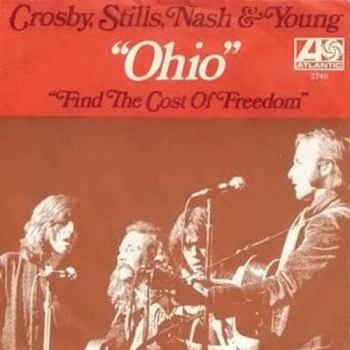 In May 1970, Neil Young came to his bandmates David Crosby, Graham Nash, and Stephen Stills with a powerful new song: "Ohio." After three days of agitated student-led protests of the invasion of Cambodia, the already incendiary situation at Kent State University exploded on the afternoon of May 4, 1970, when 28 National Guardsmen fired as many as 67 shots into a crowd of people. The 13-second barrage killed four students – Jeffrey Miller, Allison Krause, William Schroeder and Sandra Scheuer – and injured nine more... Read on the Rock Hall blog: The Story of Ohio.

This research guide provides resources on the events of May 4, 1970; the musical careers of Crosby, Stills, Nash & Young; and the song "Ohio."

Finding Resources in Your Area

There is a feature within our catalog that allows you to check your local libraries for an available copy of our resources within your geographic area.

All our books on Crosby, Stills, Nash & Young can be found here.

All our audio on Crosby, Stills, Nash & Young can be found here.

Videos about the Kent State Shootings

Kent State: 67 Shots that Pierced the Nation, a documentary chronicling the events of the days leading up to and including the Kent State Shootings on May 4, 1970. A film by Darren Samuels, Abby Xie, and Annalise Tolley

NBC 4's Mike Jackson travels to Kent State to commemorate the 40th anniversary of the Kent State shootings. He talks with professors who were there on the dark day four students were killed and nine others were injured.

All our video on Crosby, Stills, Nash & Young can be found here.

Tim McIlrath of Rise Against covers "Ohio" on "A Day to Remember" in Kent, OH.