The History of the Rock & Roll Hall of Fame

How We Got Here

In 1985, when the Rock & Roll Hall of Fame Foundation was deciding where to open its physical museum, Cleveland threw its hat into the ring for consideration. Thanks to a groundswell of public support and a $65 million commitment from city officials, the Foundation chose Cleveland as the winning site, over locales such as New York, San Francisco, Memphis and Chicago. Needless to say, the Rock Hall's construction was cooler than most. On June 7, 1993, the Who's Pete Townshend, Chuck Berry, Billy Joel, Sam Phillips, and Ruth Brown (to name a few) attended the Cleveland groundbreaking ceremony, while Jerry Lee Lewis performed a year later when the building was finished off with the placement of one last steel beam.

The Rock & Roll Hall of Fame threw open its doors on September 2, 1995, and celebrated with a blockbuster benefit concert at nearby Cleveland Municipal Stadium. This marathon show featured once-in-a-lifetime pairings and performances by greats such as James Brown, Bob Dylan, Jerry Lee Lewis, Aretha Franklin, Johnny Cash and Booker T. and the M.G.s. Besides the Municipal Stadium concert, the Rock Hall's festive opening weekend featured a downtown Cleveland parade and a ribbon-cutting ceremony attended by Little Richard and Yoko Ono.

Time Is on My Side: Rock Hall History in Print

Find all print resources related to the history of Rock & Roll Hall of Fame in our Library catalog here. Below are some highlights from our collection.

More Than This: Rock Hall EDU & Other Resources 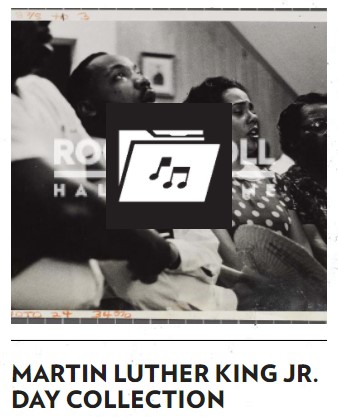 Rock Hall EDU, our free digital learning platform, is full of resources and activities that use the power of rock & roll to engage students of all ages. Our resources are developed and curated by our award-winning Education team and meet national and state learning standards in a variety of subject areas, including music, social studies, STEAM, English and more. Sign up for a free account here!

The Rock Hall's Induction Vault podcast gives unfiltered access to iconic speeches from the biggest names in music ranging from the Beatles to NWA.

Dance to the Music: Audio & Video

Select Rock & Roll Hall of Fame Induction videos are available on DVD and Blu-ray; we've included links to our Induction and other Rock Hall video holdings below. You can also find many induction speeches, performances, and more by visiting the Rock Hall's YouTube channel.

Each year, the Rock & Roll Hall of Fame Foundation's Nominating Committee selects the group of artists nominated in the Performer Category. Ballots are then sent to more than 1,000 historians, members of the music industry and artists—including every living Rock Hall Inductee—and the top performers (typically five to seven each year) receiving the most votes become that year's induction class. Beginning in 2012, fans were given the chance to vote for the nominees they'd like to see inducted into the Rock Hall. The top five vote-getters in the public poll form one ballot, which is weighted the same as the rest of the submitted ballots.

Artists—a group encompassing performers, composers and/or musicians—become eligible for induction 25 years after the release of their first commercial recording. Besides demonstrating unquestionable musical excellence and talent, inductees will have had a significant impact on the development, evolution and preservation of rock & roll.

There are 4 categories for Induction (from rockhall.com):

PERFORMERS Honoring bands and solo artists who, in their careers, have created music whose originality, impact, and influence has changed the course of rock & roll.

AHMET ERTEGUN AWARD (Formerly known as the non-performer category) Earned by non-performing industry professionals who, through their dedicated belief and support of artists and their music, have had a major influence on the creative development and growth of rock & roll and music that impacted youth culture.

EARLY INFLUENCES The Early Influence Award shall be given to a performing artist or group whose music and performance style have directly influenced and helped inspire and evolve rock & roll music that has impacted youth culture.

MUSICAL EXCELLENCE Earned by artists, musicians, songwriters, and producers whose originality and influence creating music had a dramatic impact on music.

You can find every Rock & Roll Hall of Fame Induction program at the Rock Hall's Library & Archives. Browse our holdings here.

Reelin' in the Years: Archival Resources